Yesterday was a very slow fishing day. We arrived at the pond  around 2:30 pm. I began by fishing for bait fish. It took me well over an hour just to catch two teeny tiny perch. Then I caught a small bluegill. David used this to bait my Big Game pole. It sat there for a couple of hours not getting even the tiniest nibble. Well during this slow spell I saw a green headed bull frog down the bank sitting on top of the moss bed. I know how good  they are at modeling and holding a pose so he was my photo subject for a little while.

He was not as large as the other bull frog I photographed at night.  This one was probably about 3 inches long.

All of these photos were 21 to 32 x zoom. I think he is probably an adolescent bull frog because he has no spots or it might be a female. I don’t know that much about frogs. I just refer to them all as he’s. 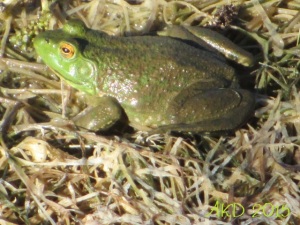 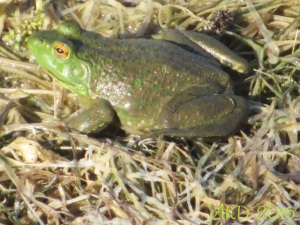 David started out fishing to the  right of me. He at least had  a small nibble and later a good bell ringing bite. But things were slow for him too so he decided to move down the bank to my left.

It was along dusk by than. I decided to try to catch some more bait fish. They were a bit more active now. I was able to catch 5 more blue gills and one more perch. While in the middle of this busy spell I saw another littler bull frog. So now I am trying to reel in bait fish and take photos of this new little bull frog. He was only about an inch and a half long. I again used 21 to 32 x zoom. He was a bit more skittish then his bigger counterparts. He soon swam under the moss bed while I was going back and forth along the bank putting bait fish in the bucket. 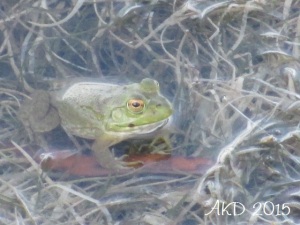 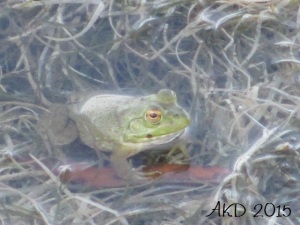 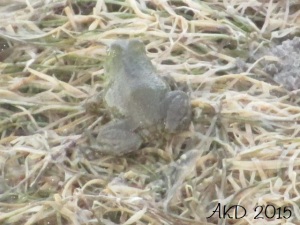 One last shot before he went on his way.

It being late in the fishing season evening fishing is getting a bit cold. I decided to pack up my stuff around 7:30 pm. My feet were cold because the bank was a wet, squishy, squelchy, mucky, mossy, mess. I finished putting my stuff away and David is at the door of the RV with some of his stuff, his feet had gotten cold finally too. So we headed home with 10 bait fish in a bucket and two bull frogs on the camera.  🙂