Because I needed to show you progress on the garden and flowers.

I needed to get pictures of the gladiolus canes that were almost finished blooming. Last night while water the flowers I noticed two more canes would be blooming soon and they were going to be PURPLE! I was correct this morning I was able to get this nice shot of one of the purple canes. The other one should be blooming by tonight or tomorrow morning. These make canes 4 and 5. I found a sixth one just coming on the other day. I don’t think all of them will cane before the weather gets to cold, hopefully I will have a better turn out next year. 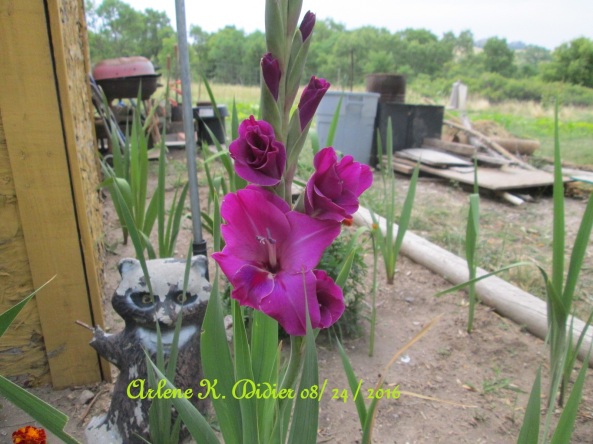 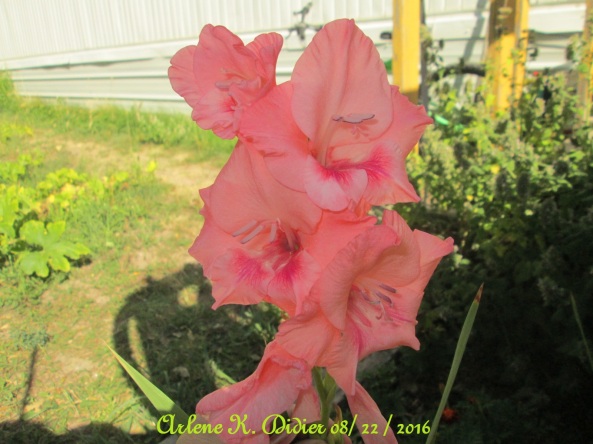 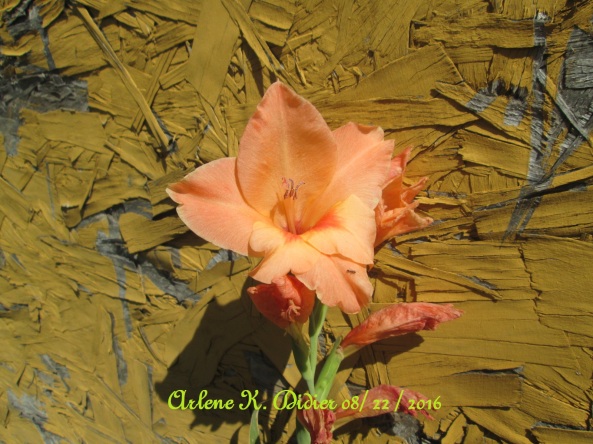 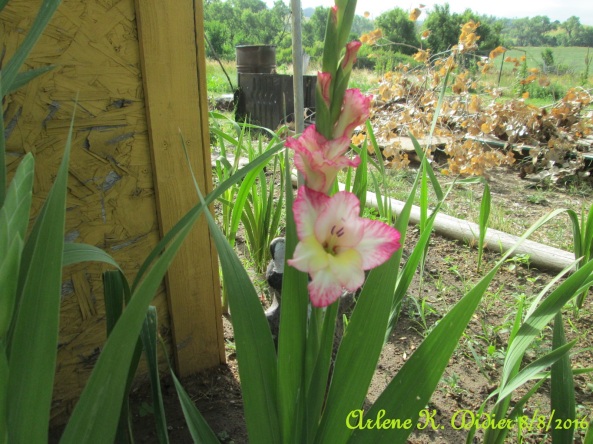 THE FIRST TO BLOOM WAS THIS WHITE WITH PINK TRIM.

The butternut and butter bush squash are doing well. So far they have not gone too crazy producing, we hope with the cooler nights they will say, “Hey, it’s getting cold we better get some more fruit on here!” It just doesn’t seem like we have as many as last year even though we have more plants. 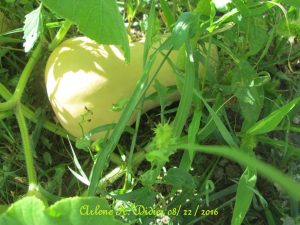 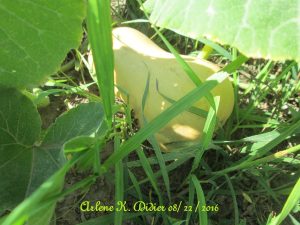 The acorn squash are the same way not a lot of fruit yet, but we don’t have as many plants as last year. 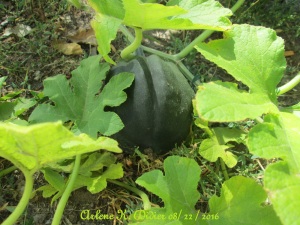 We have this one plant we thought was sick or not getting enough of the proper nutrients. So David went to Googling and discovered that it is actually a different variety. It is a Golden Acorn, not your typical Queen Table Acorn which is what the green ones are. David thinks its seed accidentally got in to this package of Queen Table acorn.  There is also a variety called the Snow White Acorn, but we didn’t get a stray seed of that one. 🙂 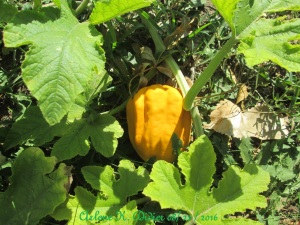 The peppers and tomatoes have been producing well. We have been using both in stir – frys and meat loaf.

The green peppers and a few of the sweet pepper plants have grown quite large. 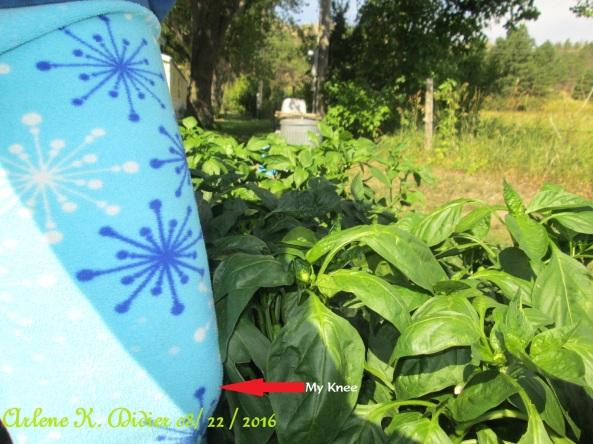 I was able to pick 12 green bell peppers that day. The sweet pepper plants are loaded too. I won’t pick those until they turn their red, yellow, and orange colors.

I wanted to save some the green bells some how. So I dug out the food dehydrator that I have not used since buying it 8 or 9 years ago. I dried 6 of the 12 just to see how it would turn out. It filled the house with the smell of peppers for about 6 hours. Mmmmm! I think they turned out ok. I put them in a freezer bag then placed that in a glass jar in the pantry as the instructions with the dehydrator said to do.

I think the next bunch I pick I will try freezing. My daughter suggested I slice them place them on a cookie sheet that is covered with freezer paper and place that in the freezer. Then when they are good and frozen then place them in a freezer bag. I want to try this way instead of chopping them into chunks and freezing them straight into the bags. They are all mushy when you use them at a later date when done this way, in my experience. 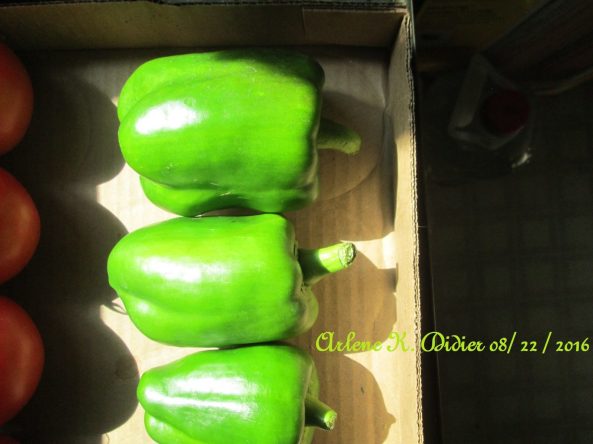 The green peppers to be used fresh. 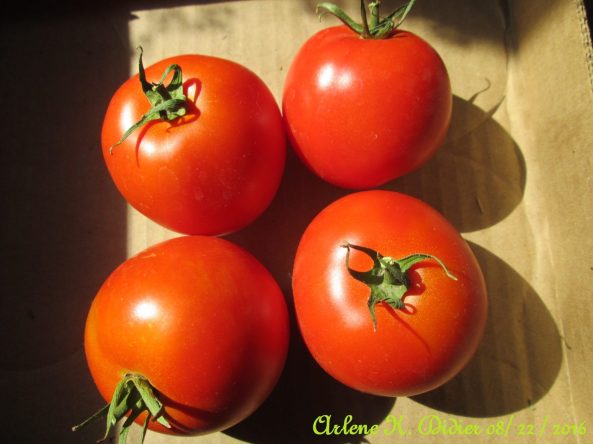 Some of the tomatoes. We have frozen a gallon bag so far.

A couple of weeks ago I decided to put a bed around the wild Johnny Jump – Ups. I found these rocks and thought they did the job nicely. I hope there will be more of them next year. I might even plant some of the helichrysums against the siding. 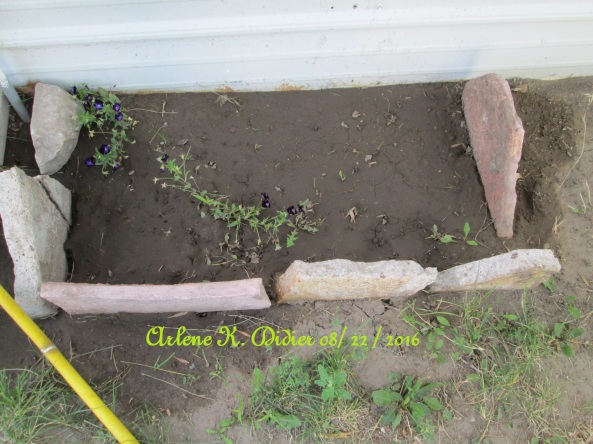 David and I went fishing a week ago. Where we wanted to fish there was a lot of small trees /bushes so David took the pruning shears to them to make a spot for me to set up my chair and fish. When I was carrying the branches away I noticed this. I know it did not grow this way on its own. I still thought it was neat and brought the branch home to show the kids.

I guess you could say it is the circle of life. 😀 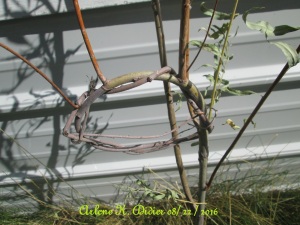 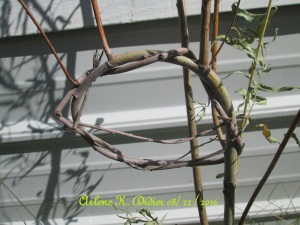 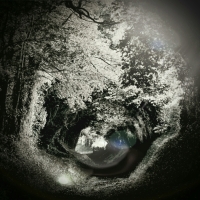 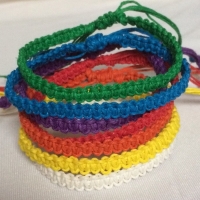