Monday (03/27/2017) was looking like it would be a nice day of weather. After I got my indoor chores done and did some stuff on the computer I thought I would go out around 10 am to do some form of yard work. I had just gotten on the internets to begin some posts when David came out at 8:30 am. This surprised me as he usually sleeps in until around 11 am. He is a night owl these days staying up after 1 am most nights. So this lead me to fix him his breakfast and him getting on the computer to do his things. I had most of the indoor stuff done I want to have done before going outside so that is where I went. I had promised Sully the last two days that I would take him out when the weather was nice again, so he came out too. I took him for his walk around the house then clipped him to the step to enjoy the day.

My plan for the day was to rake out the south side of the flower bed around the deck. I was then going to turn the soil and level out the bed. Well I got the bed raked out, as I began to rake those leaves over to the big leaf pile in front of BOB I decided that I should rake by the container with small wood scraps in it. While I was at it I might as well dump the container and move it, go through the wood scrap, put it back in the container and rake where it use to be. Now that the container was out-of-the-way I could rake around the wood pile. Now, why just rake around I should move it and rake where it used to be also. So I found a suitable spot next to the scrap container and began going through the wood pile, moving it, and stacking it in an organized fashion. Well now that the wood pile was out-of-the-way I could move the big leaf pile in front of BOB further to the east end of the driveway. So I did that. Now that every thing was neat and tidy I could lay the garden hose along the railroad ties marking off the flower bed. This will make it easier to water the squash patch and the hose will not be stretched out across the driveway getting run over.

I was in the middle of all this activity when David came out onto the deck.

He says,” You know I have been looking at the wood pile thinking it needed moved and organized!”

He must have been thinking about it so hard I caught the vibe and just went with it. I did the same thing when I cleaned up the deck a couple of weeks ago. He was thinking it needed done and I did it. I don’t mind doing these things. It is getting me out of the house and being more physical. It also helps David out, so he can continue sorting out and organizing his inventory for his urban gold mining. It is one less thing he needs to do so he can get to more important projects like replacing  a section of the shed’s east wall, getting the garden started, or working on BOB. I discovered BOB’s roof leaked in the bedroom over the winter. This was not one of the projects he had planned for BOB.

After I was all finished, David came out later in the afternoon and backed BOB in beside the deck. He is now where we can run the extension cord out to do work on him. It is a good thing I got this done on Monday as the weather forecast calls for rain for the rest of the week. 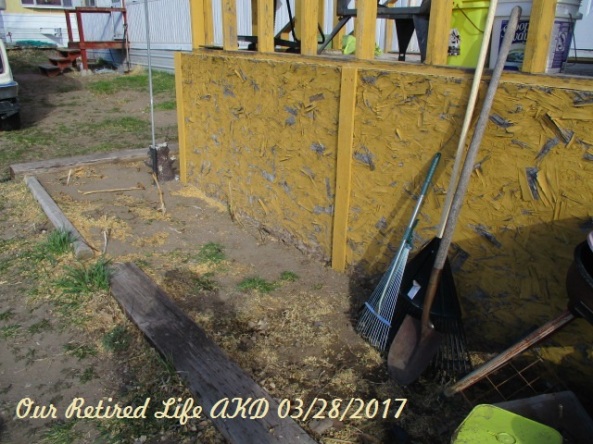 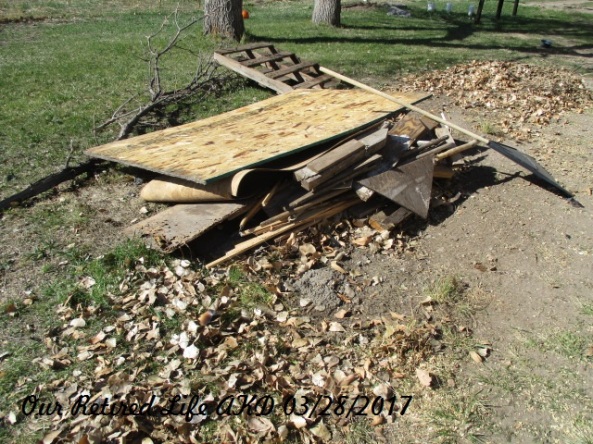 The wood pile and spot where scrap contianer used to be.

The new spot for scrap container.

The leaf pile and the leaves under the wood pile. 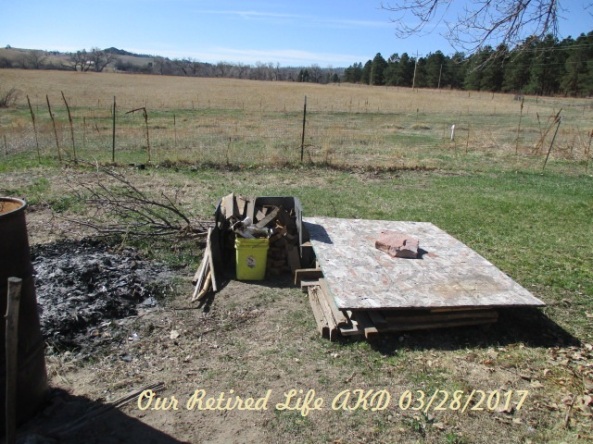 Standing in front of BOB looking toward the east.

Standing behind the leaf pile looking towards BOB to the west.

The hose placed in front of the railroad ties.

BOB backed in beside the deck.

One comment on “When One Thing Leads to Another”