This week I did some much needed weeding in the west bedroom window bed.

Once I got all the weeds pulled you can see how sparse the flowers were. I am just glad something decided to grow here. The lone little marigold in the north end, a nice bunch in the middle and the more populated south end. 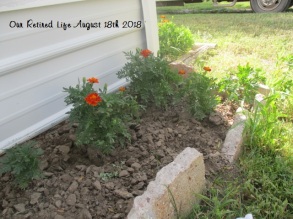 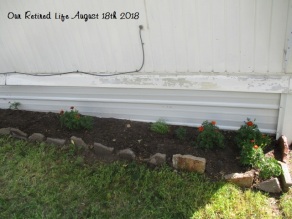 In between the nice middle bunch and the south end of marigolds, I found this little clump of alyssum. I planted it last year but nothing came up. I guess when I got the beds ready this year I raked the seeds closer to the surface so they were able to sprout.

I also did some weeding in the south bedroom window bed. The marigolds are pretty thick so the weeds didn’t have as good a chance to sprout.

I took a couple of shots of some nice looking flowers as I was weeding. The one flower has a little crab looking spider in the seven o’clock position.

A new kind of flower has begun to bloom. This one is yellowish orange. The darker coloring is shadows from the neighboring flowers. 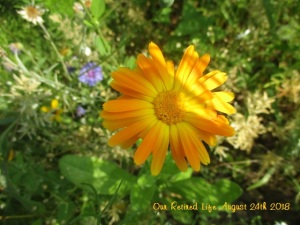 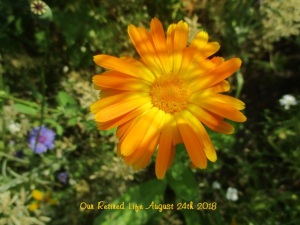 Here we have a nice patch of pink bachelor buttons.

They are not flowers but hey, I grew them!

I told David my peppers were getting big enough to see without moving the leaves of the plant to find them so we went to look at them. He stopped along the way to check how the turnips were doing. He picked all these nice ones.