Yep, I have had a bit of an attitude this month. Every day around 10 am ish I start to get antsy. If I see Mom even make a move to  get up out of her chair in the kitchen and take a few steps, I run to the front door. I want to go outside. Most of the time this month she has obliged, if the weather is nice. Which it has been except for another snow storm around the 15th and the couple of rainy days we seem to be having two days a week. I don’t think Mom will let me out today as it is only 36 degrees, cloudy and could possibly be one of those rainy days.

These two photos are from a sunny Sunday in the early part of the month.

I was having a good time trying to find some bits of grass to eat under all the leaves. 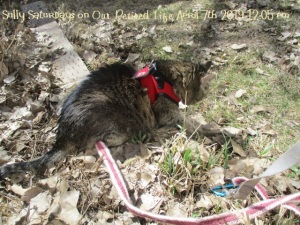 The next group of photos are from just this week. There was lots more grass available. I just laid about in the sun smelling the ground. Mom has been raking out the flowerbed around the deck. She racked out under the steps so I was able to get under them to look for sprouting catnip. None yet.

Got some catnip here. 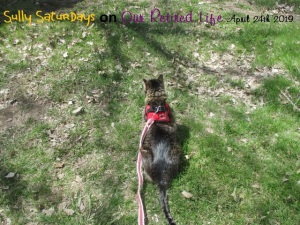 Here is that spot that smells so good.

Here is a good patch to munch. 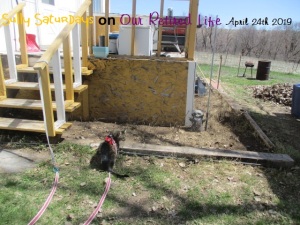 Hey, I think I might be able to get under the steps now.

Yep, all cleaned out. I can nuzzle this tree sapling. 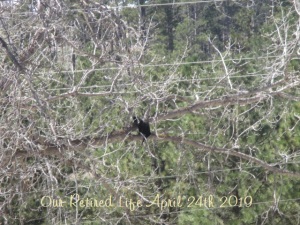 See that black spot. Yep, that is the neighbor’s cat. 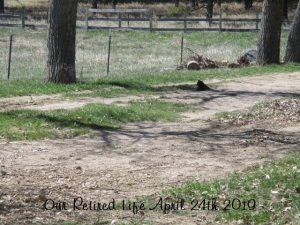 She is laying in the shade in the driveway after Mom talked her down. 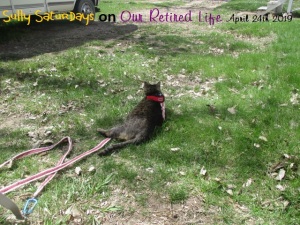 I laid in the grass to watch the whole thing. Then I kept an eye on her laying in the driveway.

I didn’t have any chance to help Mom with Crochet photos this month. She has been making squares, working on a bathtub floor rug, and a sock for her brother. She doesn’t really need to put them down on the floor to take photos. I did miss two opportunities though. She had the rug down once and she had laid out the squares on the floor too. Both times I was still taking my morning nap. I did get up in time to see the squares on the floor, but she was done taking the photos.  😦 Oh, well maybe next time.

Until next time, stop and smell the catnip! You know I always do!