Yesterday was a beautiful day. The sun was shining and a nice breeze was blowing up from the south. This was why we had planned to take our first fishing trip over to the ponds. We slowly started getting things ready to go at around 8:30 am. We were in no rush David wanted to get over to the ponds around noon. I got coffee made, made David some breakfast and then set about making us a lunch to take along.

Everything was going along nicely so we were all packed and ready to go a little after 11 am. We get into BOB, David turns the key and … NOTHING not even a click click click! BOB’s battery was dead!

So David gets out the extension cords, the ohm reader, and the battery charger and hooks it up to BOB. He lets it charge for about 15 minutes and tries again, well at least it clicked this time. So things are looking hopeful. He lets it charge a bit longer. Then he tests it with the ohm reader again. The battery is not holding a charge if he takes it off the charger. Now the only thing left to do is get a new battery. We have to wait for Nick to get home from work, so David can use the pickup to go back into town to get a new one.

While we wait we decide to pretend to be camping in the driveway and eat our lunch in BOB. Nick gets home just before 2 pm. David loads up the dead battery and heads to town. He gets back around 2:30 pm. He replaces the battery and the air filter housing that he had to take off to get the battery out. He gets in BOB, turns the key, and …  VRRRM VRRRRM VRRRRRRRM! Yippeee BOB is all better!

We still don’t know why his battery died. He was started up about two weeks ago when David moved him after I got done cleaning up the end of the driveway. It also was a 5 year battery that was in BOB when we bought him. We have had him for 3 years, so it could have been due.

We did not go fishing as it was already after 3pm. Also Kay and Marty came to visit. It would be rude not to stay and play with the grandson.  Fishing will just have to wait for another day.  😀 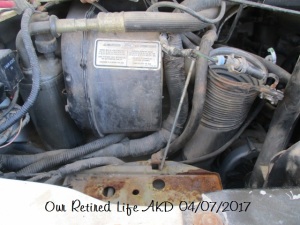 Where BOB’s Battery should sit.

David checking the air filter since he had the housing for it off.

Filter was fine. Putting it back together.

I didn’t get a photo of the new battery because David had already closed the hood.

I wasn’t going to ask him to open it again just for a photo. 🙂