As the summer progresses more flowers have started to show their colorful faces. Although this year they are a bit on the short side. All the cool, cloudy, wet days have slowed their roll. The ones that do bloom are cute and pretty.

This was the first little petunia this year. It was hidden a bit by the weed grass. 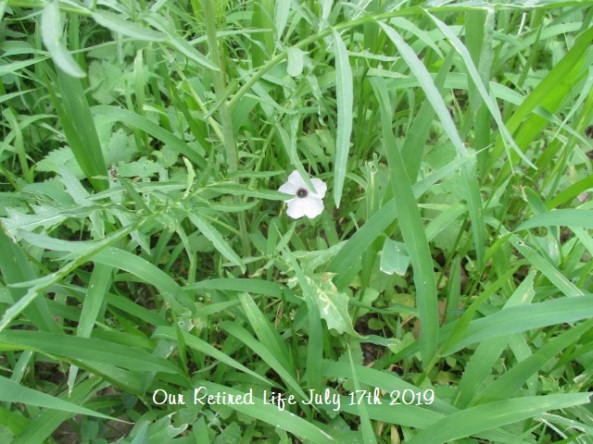 This small white cosmos was in the same area.

This was an orange California poppy. 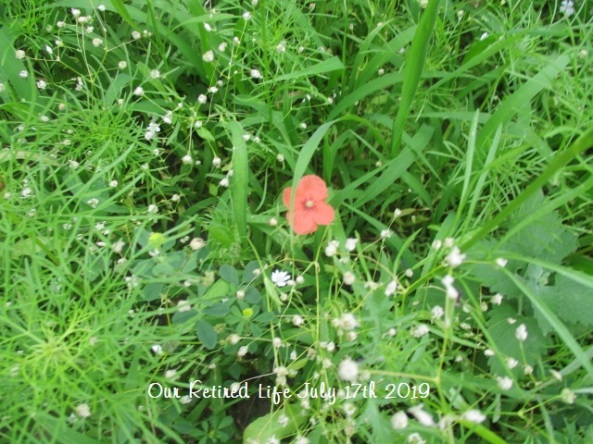 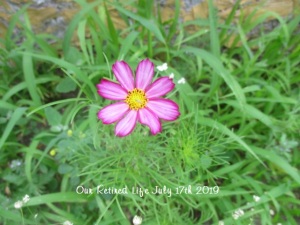 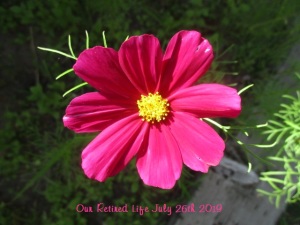 Close up and greenery pink cosmos 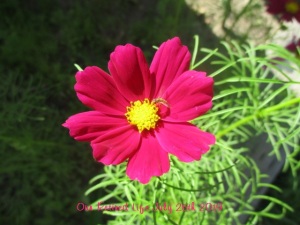 Another close up cosmos with greenery and a small bee like insect.

The Bachelor Buttons will not be out done.

This purple button was dancing to Twist And Shout.

Two Pretty in Pink Poppies
It always seem that when the poppies bloom they look there best on a windy day.
I have to hold them but that still didn’t keep the petals from swaying in the wind. 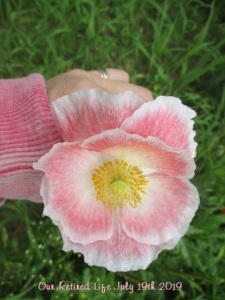 The first golden tickseed.
It was already starting to fade from being wind blown.

The second little petunia after that bed was weeded. 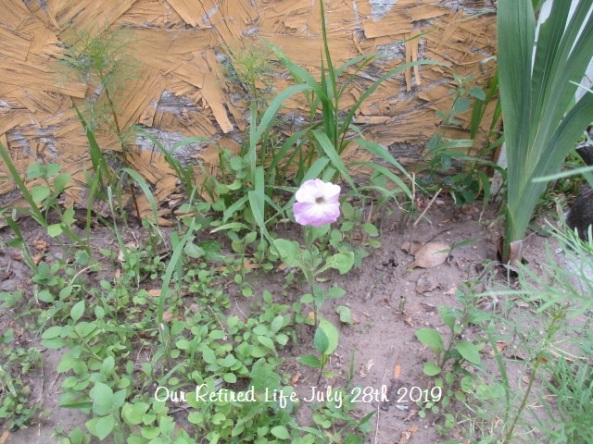 This flower is one that was a late bloomer last year. Also it may have been late because when things were first sprouting I thought it was a weed. Once the weeds got taller I did not see it. So a lone field larkspur plant with purple flowers survived last year. 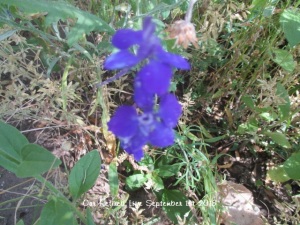 This year I again sprinkled this same wildflower mixture. I again was pulling this plant as a weed when things were first sprouting. Somehow this guy hid himself away amongst the taller weeds from my grabby little fingers this year.
I again have a lone forking, rocket, or field larkspur plant but this year the flowers are pink. I was also able to get better photos as he is right along the edge next to the railroad tie border.

Close up of a flower.

My final flower is not an on purpose flower. It is actually that carrot I let go wild.

It has gotten quite tall and has several branches with many flower heads.
It has many insect visitors including this busy bumble bee.
I had a heck of a time just getting the three shots of her. 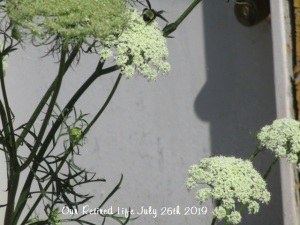 Now on to the weeding.
I weeded the west side of the deck bed. That is why I was able to find the second petunia a few days later. 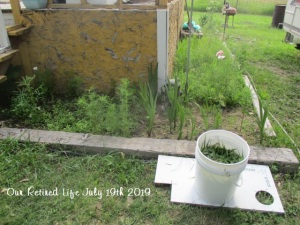 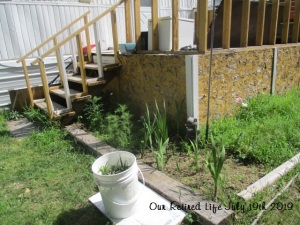 I got the south bedroom window bed weeded too.

Weed Me, Arlene! Weed Me Now! 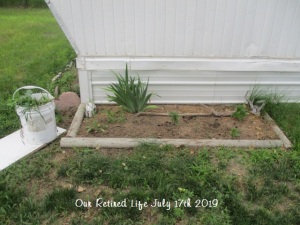 The can peppers and the south side of the shed were weed also. 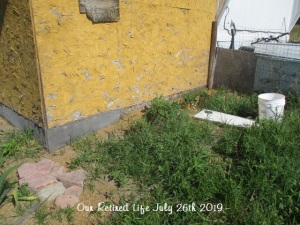 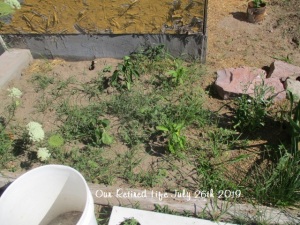 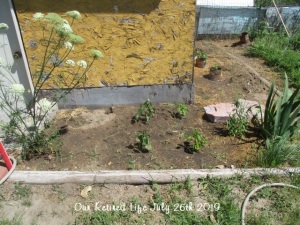 David decided to take the water heater out of BOB. He said once he got to looking at it, that he thinks this was a replacement heater. He doesn’t think it was properly hooked back up as there were wires that were not even hooked in to the heater at all. (see photo below for wires)

The water heater removed and some of the copper tubing. 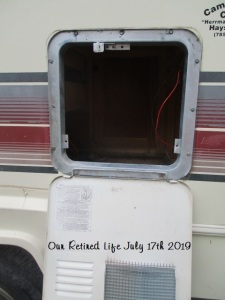 Space where the water heater use to be. 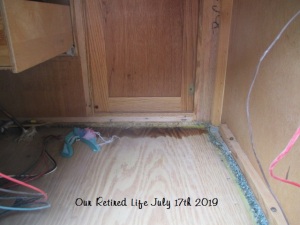 Viewing from outside of BOB.

Blurry view inside BOB looking out with cover closed.

David eventually wants to put one of those electric tankless water heaters in BOB. We don’t really need hot water at this point. We don’t need it for showers since we took out the tub/shower and will be taking those at campsites and RV parks that provide showers. We can just boil water on the portable camp stove for doing dishes for now.
He also removed all the extra copper tubing (as you can see it is laying on the ground in the above photo of the water heater) for the propane that went to it ,the furnace and the refrigerator. Those have also been removed in previous remodels. After he got the tubing out he was able to find some end caps at ACE hardware to seal off the ends.
Now that all the extra propane lines were capped off, David wanted to make sure the propane tank worked properly and still provided gas to the stove and oven in BOB. The propane system is in proper working order. David was afraid that he may have to remove the tank and figure out a different propane system for the stove and oven.
Wooooo Hoooo! I don’t need to use the camp stove for boiling water or cooking. I also now have a working oven to cook in. Nick was glad that the oven works too. He wants me to be able to make my cheesy rice dish.

I was able to get BOB’s bedroom back in order.

I will finish off this post with Sully pouncing on one of the bijillion grasshoppers we have this year. 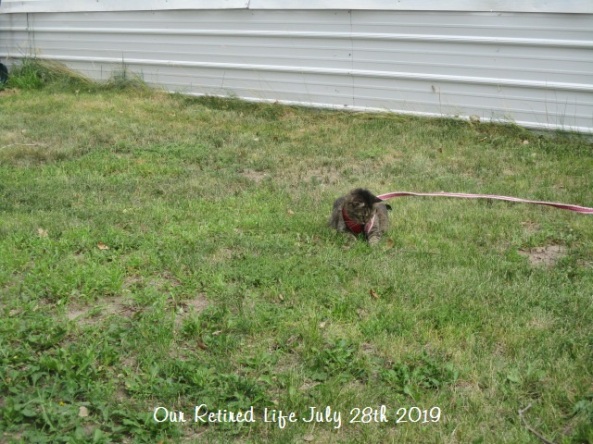 One comment on “Flowers, Weeding, BOB, and Sully Too”